You are here: Home / Uncategorized / Sermon Are 501c3 Churches Evil?

Look, this is a warning. There’s this group of idiots out there who don’t study the Scriptures at all.

Is this the truth? Have I bowed down to Satan? Do I work for Satan like the accusers say?

What is a 501c3 church? What does this mean? We need to know this because people are calling us evil.

[3] “An organization may qualify for an exemption from federal income tax under section 501(c)(3) if it is organized and operated exclusively for one or more of the following purposes. Religious. Charitable. Scientific. Testing for public safety. Literary. Educational. The prevention of cruelty to children or animals.”

Is It Evil For A Church To Follow The Law And Use Donations Free Of Taxation?

Please tell me if you think that’s evil. No, it’s not evil. Could the government take that money if they wanted?

[4] “To qualify, the organization must be organized as a corporation (including a limited liability company), unincorporated association, or trust. Sole proprietorships, partnerships, individuals, or loosely associated groups of individuals won’t qualify.” 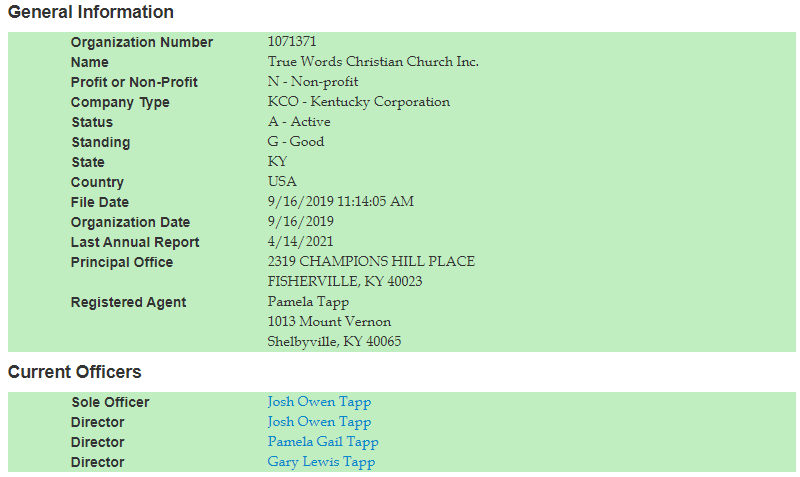 Now, if we wanted, we can pay people at this church for doing religious work for this church.

But, do we pay anyone here at this church? NO, WE DON’T. We work for God and God pays us.

We use the money that we receive here for the sole purpose of winning souls to Jesus Christ.

Are we a business here at this church? Let’s see. What type of business are we doing?

[6] 1 Chronicles 26:29-30 Of the Izharites, Chenaniah and his sons were for the outward business over Israel, for officers and judges. 30 And of the Hebronites, Hashabiah and his brethren, men of valour, a thousand and seven hundred, were officers among them of Israel on this side Jordan westward in all the business of the LORD, and in the service of the king.

[7] 2 Chronicles 13:10 But as for us, the LORD is our God, and we have not forsaken him; and the priests, which minister unto the LORD, are the sons of Aaron, and the Levites wait upon their business:

[8] 2 Chronicles 13:11 And they burn unto the LORD every morning and every evening burnt sacrifices and sweet incense: the shewbread also set they in order upon the pure table; and the candlestick of gold with the lamps thereof, to burn every evening: for we keep the charge of the LORD our God; but ye have forsaken him.

I simply want people to know that I’m not here for the money. I could care less about the money.

[9] Nehemiah 11:16 And Shabbethai and Jozabad, of the chief of the Levites, had the oversight of the outward business of the house of God.

Let’s see. The money you have in your bank account has already been taxed.

It’s Evil To Use Tax Free Money To Win Souls To Jesus Christ???

Which is more evil? The government giving free money to people who won’t work?

[11] Luke 2:48-49 And when they saw him, they were amazed: and his mother said unto him, Son, why hast thou thus dealt with us? behold, thy father and I have sought thee sorrowing. 49 And he said unto them, How is it that ye sought me? wist ye not that I must be about my Father’s business?

[12] Romans 12:11 Not slothful in business; fervent in spirit; serving the Lord;

[13] 1 Thessalonians 4:11 And that ye study to be quiet, and to do your own business, and to work with your own hands, as we commanded you;

[14] Matthew 17:24-25 And when they were come to Capernaum, they that received tribute money came to Peter, and said, Doth not your master pay tribute? 25 He saith, Yes. And when he was come into the house, Jesus prevented him, saying, What thinkest thou, Simon? of whom do the kings of the earth take custom or tribute? of their own children, or of strangers?

[15] Matthew 17:26-27 Peter saith unto him, Of strangers. Jesus saith unto him, Then are the children free. 27 Notwithstanding, lest we should offend them, go thou to the sea, and cast an hook, and take up the fish that first cometh up; and when thou hast opened his mouth, thou shalt find a piece of money: that take, and give unto them for me and thee.

Jesus Was Against Taxes For The People Of The Land

Why? Jesus was against taxes as you can see in these Scriptures, but did He decide to fight against the taxes?

Why would we want to pay all of those taxes when we don’t have to ACCORDING TO LAW?

The individual who donated gets a tax break. “WOW, THAT IS SO EVIL AND GREEDY.”

I’ve been warned that the STATE is in charge of our church since we are a 501c3 church.

Is The Government Attempting To Control All The Churches?

So, these people who are against 501c3 churches will tell you that the government is controlling us. 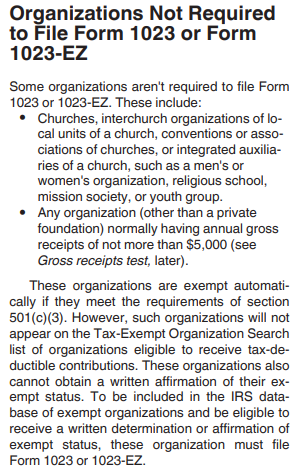 I’m not breaking the law by preaching against the decisions that Joe Biden makes.

Is It Evil To Not Do All Of These Things Required By 501c3 Churches?

Here’s what we’re not allowed to do as a 501c3 church, and you tell me if this is evil:

What else is there? Let’s see the other rules for a 501c3 church.

Here’s the last rule we must follow as a 501c3 church.

God’s law is not grievous or harmful to anyone. His law is perfect.

We aren’t breaking a contract, as these clowns will tell you, by preaching the Bible.

Did I Denounce The Lord Jesus Christ As My Creator???

I am being accused of signing a document that denounced the Lord Jesus Christ as my Creator.

[20] “In case you may not have understood this, it means your church has NO constitutional rights once you sign up for 501c3. You have no First Amendment freedom of speech or freedom of religion rights, and you have no Fifth Amendment rights, which means the state can hold you as a witness against yourself to sentence you for any crime they choose. (This is not to say our government will do that, but I’m pointing out that they have the legal power to do that under the 501c3 contract.)”

[21] “After the 501c3 contract is established, you are now a corporate soul, which means you only have privileges (not freedoms) that are granted by the judicial system according to the regulations of your contract. At that point, the IRS has full power to remove your privileges whenever they choose, and for any reason.”

[22] Acts 5:29 Then Peter and the other apostles answered and said, We ought to obey God rather than men.

We are doing our best to follow the laws of this land while working for God. Our job is not to cause problems.

For attempting to follow the laws that aren’t against God’s law, we get labeled as a devil church by these idiots.

This corrupted man says: “If you truly followed God rather than men, you would not be a 501c3 in the first place.”

So, now, I am a liar attempting to build a wicked church according to this man.

The You Tube commenter told me that he would have visited our church “IF” we weren’t registered as a 501c.

[23] Hebrews 10:24-25 And let us consider one another to provoke unto love and to good works: 25 Not forsaking the assembling of ourselves together, as the manner of some is; but exhorting one another: and so much the more, as ye see the day approaching.

These evil men and women who spread this trash about 501c3 churches being evil are doing what?

God says, “NOT FORSAKING THE ASSEMBLING OF OURSELVES TOGETHER, AS THE MANNER OF SOME IS.”

We are a non-profit organization. We are a corporation meaning we are TOGETHER with each other.

What’s the better way? For all of us to be together as one OR for all you to just allow me to do whatever I want?

Do You Think God Wants Me To Take Money Under The Table Like Judas Iscariot?

What do you think God wants from us? One man or together?

Am I evil that I set this church up according to law so you would get a tax break on taxes that I don’t think you should have to pay in the first place?

Am I being greedy because you’ll get a tax break? You’ll be able to use the money you made for good.

Am I not preaching the word of God because the government muzzled me? Is that what you see here?

When I side with God’s law over man, I am not breaking a contract I signed as a 501C3 non-profit corporation.

So, if you come at me calling me evil and wicked for becoming a 501c3 church, I will respond.

I know what we’re doing here. We’re teaching and preaching the word of God.

The other side says we’re evil because we take tax breaks and report everything publicly.

You don’t need to attack churches that are 501c3 churches.

If a church is teaching that 501c3 churches are of the devil, I would stay away from those.