You are here: Home / King James Bible / Sermon Is Luke Wrong About The Son Of Arphaxad?

[2] The title of the sermon: “Is Luke Wrong About The Son Of Arphaxad?”

Is This An Error In The King James Bible?

[4] Matthew 1:1-2 The book of the generation of Jesus Christ, the son of David, the son of Abraham. 2 Abraham begat Isaac; and Isaac begat Jacob; and Jacob begat Judas and his brethren;

[6] 2 Chronicles 26:1 Then all the people of Judah took Uzziah, who was sixteen years old, and made him king in the room of his father Amaziah.

[7] 2 Chronicles 26:23 So Uzziah slept with his fathers, and they buried him with his fathers in the field of the burial which belonged to the kings; for they said, He is a leper: and Jotham his son reigned in his stead.

[8] 2 Kings 14:21 And all the people of Judah took Azariah, which was sixteen years old, and made him king instead of his father Amaziah.

[9] 2 Kings 15:1-2 In the twenty and seventh year of Jeroboam king of Israel began Azariah son of Amaziah king of Judah to reign. 2 Sixteen years old was he when he began to reign, and he reigned two and fifty years in Jerusalem. And his mother’s name was Jecholiah of Jerusalem.

[10] Matthew 22:41-42 While the Pharisees were gathered together, Jesus asked them, 42 Saying, What think ye of Christ? whose son is he? They say unto him, The Son of David.

[11] Matthew 22:43-45 He saith unto them, How then doth David in spirit call him Lord, saying, 44 The LORD said unto my Lord, Sit thou on my right hand, till I make thine enemies thy footstool? 45 If David then call him Lord, how is he his son?

[13] Genesis 10:21-24 Unto Shem also, the father of all the children of Eber, the brother of Japheth the elder, even to him were children born. 22 The children of Shem; Elam, and Asshur, and Arphaxad, and Lud, and Aram. 23 And the children of Aram; Uz, and Hul, and Gether, and Mash. 24 And Arphaxad begat Salah; and Salah begat Eber.

Cainan Is Not Mentioned In The Old Testament 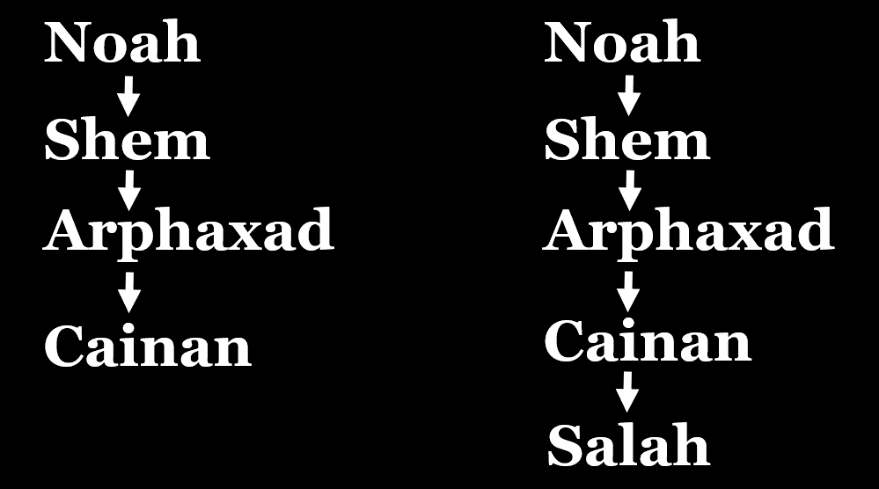 The name Arphaxad is mentioned 10 times in the entire Bible.

I triple checked to see if I was missing a different spelling of the name Cainan.

People will tell you that the King James Bible has mistakes because of this Scripture about the son of Arphaxad in Luke Chapter 3.

[22] “This Cainan is not mentioned by Moses in Ge 11:12 nor has he ever appeared in any Hebrew copy of the Old Testament, nor in the Samaritan version, nor in the Targum; nor is he mentioned by Josephus, nor in 1Ch 1:24 where the genealogy is repeated; nor is it in Beza’s most ancient Greek copy of Luke: it indeed stands in the present copies of the Septuagint, but was not originally there;”

[23] “And therefore could not be taken by Luke from thence, but seems to be owing to some early negligent transcriber of Luke’s Gospel, and since put into the Septuagint to give it authority: I say “early”, because it is in many Greek copies, and in the Vulgate Latin, and all the Oriental versions, even in the Syriac, the oldest of them;”

So, John Gill admits that MANY of the copies of the original Greek of the New Testament includes Cainan in Luke Chapter 3.

John Gill says, “There never was such a Cainan, the son of Arphaxad.” Do you see that?

Again, the so-called Bible experts decrease the faith of believers who are reading their commentaries.

[26] Some suppose that Cainan was a surname of Sala, and that the names should be read together thus, The son of Heber, the son of Salacainan, the son of Arphaxad, etc. If this does not untie the knot, it certainly cuts it; and the reader may pass on without any great scruple or embarrassment. There are many sensible observations on this genealogy in the notes at the end of Bishop Newcome’s Harmony.

[28] But, as to that, it is sufficient to say that the Seventy Interpreters, who, before our Saviour’s time, translated the Old Testament into Greek, for reasons best known to themselves inserted that Cainan; and St. Luke, writing among the Hellenist Jews, was obliged to make use of that translation, and therefore to take it as he found it.

Do you see what they’re doing? They are saying that there’s no way Luke got this from God.

Did Luke Make A Mistake When He Lists Cainan As The Son Of Arphaxad?

“Luke made a mistake when he wrote that Cainan was the son of Arphaxad.” That’s what they say.

[29] Proverbs 30:5-6 Every word of God is pure: he is a shield unto them that put their trust in him. 6 Add thou not unto his words, lest he reprove thee, and thou be found a liar.

The pastors and preachers in today’s world will tell you that we don’t have the perfect word of God.

[30] 2 Timothy 3:14-15 But continue thou in the things which thou hast learned and hast been assured of, knowing of whom thou hast learned them; 15 And that from a child thou hast known the holy scriptures, which are able to make thee wise unto salvation through faith which is in Christ Jesus.

[31] 2 Timothy 3:16-17 All scripture is given by inspiration of God, and is profitable for doctrine, for reproof, for correction, for instruction in righteousness: 17 That the man of God may be perfect, throughly furnished unto all good works.

I hope you’re seeing what the so-called “Bible” scholars are actually doing?

[32] “Some have suggested that the Jews purposely excluded the second Cainan from their copies, with the design of rendering the Septuagint and Luke suspected;”

[33] “Others that Moses omitted Cainan, being desirous of reckoning ten generations only from Adam to Noah, and from Noah to, Abraham.”

[34] “Some suppose that Arphaxad was father of Cainan and Salah – of Salah naturally, and of Cainan legally;”

[35] “While others allege that Cainan and Salah were the same person under two names.”

[36] “It is believed by many, however, that the name of this second Cainan was not originally in the text even of Luke, but is an addition of inadvertent transcribers, who, remarking it in scmi copies of the Septuagint, added it.”

They act like they know 100% for sure that Luke made a mistake.

[37] 2 Peter 1:19 We have also a more sure word of prophecy; whereunto ye do well that ye take heed, as unto a light that shineth in a dark place, until the day dawn, and the day star arise in your hearts:

[38] 2 Peter 1:20-21 Knowing this first, that no prophecy of the scripture is of any private interpretation. 21 For the prophecy came not in old time by the will of man: but holy men of God spake as they were moved by the Holy Ghost.

You can either believe what THESE SCRIPTURES right here say or not.

Yes, the word of God existed perfectly before the King James Bible.

[39] 1 John 5:7 For there are three that bear record in heaven, the Father, the Word, and the Holy Ghost: and these three are one.

[40] John 10:35-36 If he called them gods, unto whom the word of God came, and the scripture cannot be broken; 36 Say ye of him, whom the Father hath sanctified, and sent into the world, Thou blasphemest; because I said, I am the Son of God?

Here’s the truth about Luke Chapter 3 and Cainan referred to as the son of Arphaxad.

Cainan as the son of Arphaxad is seen in the huge majority of Greek manuscripts.

For the few manuscripts out of 5800, approximately, that do take out the name of Cainan out:

Is Cainan Truly The Son Of Arphaxad?

So, what’s the answer to Cainan being the Son of Arphaxad in the Book of Luke but not shown anywhere else?

[41] 1 Samuel 24:16 And it came to pass, when David had made an end of speaking these words unto Saul, that Saul said, Is this thy voice, my son David? And Saul lifted up his voice, and wept.

[43] Ruth 4:17 And the women her neighbours gave it a name, saying, There is a son born to Naomi; and they called his name Obed: he is the father of Jesse, the father of David.

Matthew Chapter 1 is the genealogy of Jesus Christ from Joseph’s side.

[44] Matthew 1:15-16 And Eliud begat Eleazar; and Eleazar begat Matthan; and Matthan begat Jacob; 16 And Jacob begat Joseph the husband of Mary, of whom was born Jesus, who is called Christ.

[45] Luke 3:23 And Jesus himself began to be about thirty years of age, being (as was supposed) the son of Joseph, which was the son of Heli,

Do you see how the Bible works? There’s not a contradiction with Joseph’s dad.

There Are Many Different Explanations That Make Perfect Sense

Or, maybe Cainan is the biological son of Arphaxad and he dies early for some reason.

[48] Psalm 12:6-7 The words of the LORD are pure words: as silver tried in a furnace of earth, purified seven times. 7 Thou shalt keep them, O LORD, thou shalt preserve them from this generation for ever.

[49] Psalm 100:5 For the LORD is good; his mercy is everlasting; and his truth endureth to all generations.

[50] 1 Peter 1:24-25 For all flesh is as grass, and all the glory of man as the flower of grass. The grass withereth, and the flower thereof falleth away: 25 But the word of the Lord endureth for ever. And this is the word which by the gospel is preached unto you.

Most people think they make it to heaven by being a good person, and they miss out on God's way to heaven. God sets the rules so we should listen to what God says.

Download this short book. By the time you're finished reading, you'll know whether or not you're going to heaven.