[2] The title of the sermon today is “REVELATION CHAPTER 16.”

God’s Wrath Is Being Poured Out

[3] Revelation 16:1 And I heard a great voice out of the temple saying to the seven angels, Go your ways, and pour out the vials of the wrath of God upon the earth.

[4] Revelation 16:2 And the first went, and poured out his vial upon the earth; and there fell a noisome and grievous sore upon the men which had the mark of the beast, and upon them which worshipped his image.

The trumpets and the vials are NOT the exact same thing, obviously.

Just as we did in the Revelation Chapter 14 sermon, let’s do a quick overview of the entire Book of Revelation. 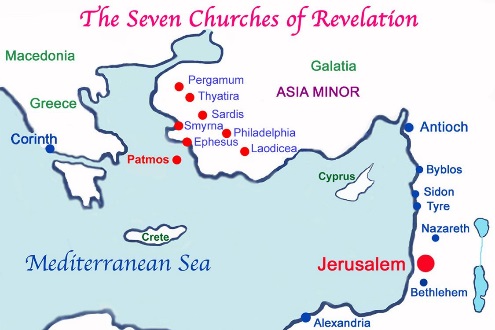 Do you remember that JESUS CHRIST HIMSELF gives us the order of events in the Book of Revelation?

[7] Revelation 4:1 After this I looked, and, behold, a door was opened in heaven: and the first voice which I heard was as it were of a trumpet talking with me; which said, Come up hither, and I will shew thee things which must be hereafter.

The Book Of Revelation Is In Chronological Order

On the Day of the Lord, the RAPTURE happens. This happens in Revelation Chapter 7.

[8] Revelation 11:15 And the seventh angel sounded; and there were great voices in heaven, saying, The kingdoms of this world are become the kingdoms of our Lord, and of his Christ; and he shall reign for ever and ever. 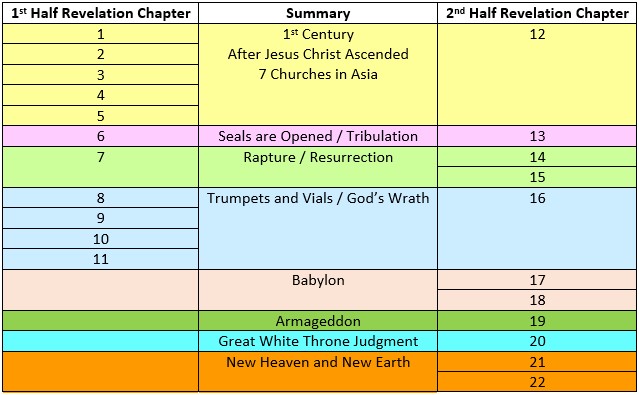 So, in the Book of Revelation, we see the TRIBULATION covered twice.

VIALS are VIALS because something is being POURED OUT upon something.

With that said, let’s look at your Daniel’s 70th week charts and find the trumpets and vials.

Let’s Go Over Each Vial In Detail

We’ve went over the trumpet judgements in detail, but as we compare each trumpet and vial, I want to go over each vial in detail.

[13] Job 2:7-9 So went Satan forth from the presence of the LORD, and smote Job with sore boils from the sole of his foot unto his crown. 8 And he took him a potsherd to scrape himself withal; and he sat down among the ashes. 9 Then said his wife unto him, Dost thou still retain thine integrity? curse God, and die.

[14] Isaiah 1:6 From the sole of the foot even unto the head there is no soundness in it; but wounds, and bruises, and putrifying sores: they have not been closed, neither bound up, neither mollified with ointment.

[15] Isaiah 3:16-17 Moreover the LORD saith, Because the daughters of Zion are haughty, and walk with stretched forth necks and wanton eyes, walking and mincing as they go, and making a tinkling with their feet: 17 Therefore the Lord will smite with a scab the crown of the head of the daughters of Zion, and the LORD will discover their secret parts.

[16] Isaiah 3:18 In that day the Lord will take away the bravery of their tinkling ornaments about their feet, and their cauls, and their round tires like the moon,

Many People Believe They Are “Higher” Than Others

[19] Luke 16:20-21 And there was a certain beggar named Lazarus, which was laid at his gate, full of sores, 21 And desiring to be fed with the crumbs which fell from the rich man’s table: moreover the dogs came and licked his sores.

[21] Exodus 7:21 And the fish that was in the river died; and the river stank, and the Egyptians could not drink of the water of the river; and there was blood throughout all the land of Egypt.

The Book Of Revelation Is Cut In Half

Again, all of this is proof that the Book of Revelation is cut in half and the events repeat.

[23] Revelation 16:5-7 And I heard the angel of the waters say, Thou art righteous, O Lord, which art, and wast, and shalt be, because thou hast judged thus. 6 For they have shed the blood of saints and prophets, and thou hast given them blood to drink; for they are worthy. 7 And I heard another out of the altar say, Even so, Lord God Almighty, true and righteous are thy judgments.

[24] Deuteronomy 32:43 Rejoice, O ye nations, with his people: for he will avenge the blood of his servants, and will render vengeance to his adversaries, and will be merciful unto his land, and to his people.

[25] Isaiah 49:26 And I will feed them that oppress thee with their own flesh; and they shall be drunken with their own blood, as with sweet wine: and all flesh shall know that I the LORD am thy Saviour and thy Redeemer, the mighty One of Jacob.

The Fourth Vial Is Poured Out Upon The Sun

But what do we see with the FOURTH VIAL?

[27] 2 Chronicles 30:8 Now be ye not stiffnecked, as your fathers were, but yield yourselves unto the LORD, and enter into his sanctuary, which he hath sanctified for ever: and serve the LORD your God, that the fierceness of his wrath may turn away from you.

[28] Acts 7:51 Ye stiffnecked and uncircumcised in heart and ears, ye do always resist the Holy Ghost: as your fathers did, so do ye.

[29] Job 9:1-4 Then Job answered and said, 2 I know it is so of a truth: but how should man be just with God? 3 If he will contend with him, he cannot answer him one of a thousand. 4 He is wise in heart, and mighty in strength: who hath hardened himself against him, and hath prospered?

COMPLETE DARKNESS IS NOT A JOKE. Try living in complete darkness. Not good.

I want to take a few minutes to make sure you see the importance of Revelation 16:10.

[31] Revelation 16:10 And the fifth angel poured out his vial upon the seat of the beast; and his kingdom was full of darkness; and they gnawed their tongues for pain,

[32] Revelation 13:3-5 And I saw one of his heads as it were wounded to death; and his deadly wound was healed: and all the world wondered after the beast. 4 And they worshipped the dragon which gave power unto the beast: and they worshipped the beast, saying, Who is like unto the beast? who is able to make war with him? 5 And there was given unto him a mouth speaking great things and blasphemies; and power was given unto him to continue forty and two months.

[33] Revelation 16:10 And the fifth angel poured out his vial upon the seat of the beast; and his kingdom was full of darkness; and they gnawed their tongues for pain,

[34] Revelation 11:15 And the seventh angel sounded; and there were great voices in heaven, saying, The kingdoms of this world are become the kingdoms of our Lord, and of his Christ; and he shall reign for ever and ever.

All Of The Vials Cannot Happen After All Of The Trumpets

So, how can the VIALS happen AFTER the TRUMPETS? They can’t.

It’s very easy to see that Revelation Chapter 12 jumps back in time with the birth of Jesus Christ.

[35] Revelation 10:10-11 And I took the little book out of the angel’s hand, and ate it up; and it was in my mouth sweet as honey: and as soon as I had eaten it, my belly was bitter. 11 And he said unto me, Thou must prophesy again before many peoples, and nations, and tongues, and kings.

We’ve talked about the identity of those 4 ANGELS before, but remember that ANGELS ARE SPIRITS.

[37] Genesis 3:24 So he drove out the man; and he placed at the east of the garden of Eden Cherubims, and a flaming sword which turned every way, to keep the way of the tree of life.

[38] Revelation 16:12 And the sixth angel poured out his vial upon the great river Euphrates; and the water thereof was dried up, that the way of the kings of the east might be prepared.

What Else Happens With The Fifth Vial Of God’s Wrath?

[40] Revelation 16:14 For they are the spirits of devils, working miracles, which go forth unto the kings of the earth and of the whole world, to gather them to the battle of that great day of God Almighty.

[41] Revelation 16:15 Behold, I come as a thief. Blessed is he that watcheth, and keepeth his garments, lest he walk naked, and they see his shame.

[42] Revelation 22:7 Behold, I come quickly: blessed is he that keepeth the sayings of the prophecy of this book.

[43] Revelation 16:16 And he gathered them together into a place called in the Hebrew tongue Armageddon.

God Doesn’t “BATTLE” Anyone Or Anything

But I want to show you something about the “BATTLE” of ARMAGEDDON. It’s not really a battle.

[44] Revelation 19:19 And I saw the beast, and the kings of the earth, and their armies, gathered together to make war against him that sat on the horse, and against his army.

[45] Revelation 19:20 And the beast was taken, and with him the false prophet that wrought miracles before him, with which he deceived them that had received the mark of the beast, and them that worshipped his image. These both were cast alive into a lake of fire burning with brimstone.

[46] Revelation 19:21 And the remnant were slain with the sword of him that sat upon the horse, which sword proceeded out of his mouth: and all the fowls were filled with their flesh. 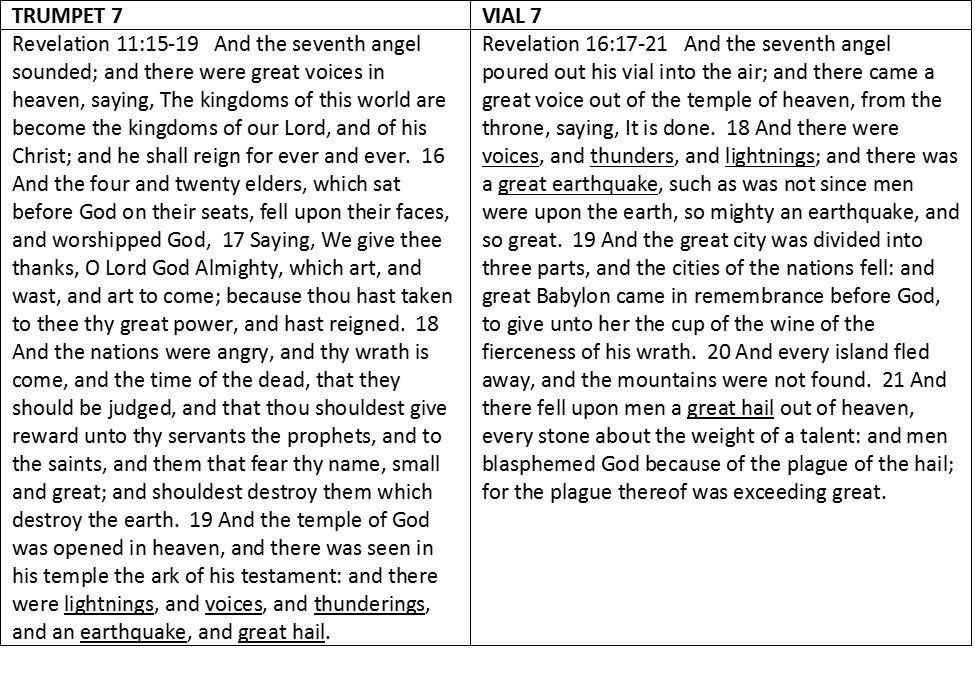 We see the JUDGMENT come upon GREAT BABYLON in Revelation 16.

[48] Revelation 16:17 And the seventh angel poured out his vial into the air; and there came a great voice out of the temple of heaven, from the throne, saying, It is done.

Same thing when Jesus died on the cross. His work that He came to do on earth was finished.

Some false preachers try to minimize the burial and resurrection.

When the seventh angel says, “It is finished.” There’s obviously more that must happen.

[49] Revelation 16:18 And there were voices, and thunders, and lightnings; and there was a great earthquake, such as was not since men were upon the earth, so mighty an earthquake, and so great.

[50] Revelation 16:19 And the great city was divided into three parts, and the cities of the nations fell: and great Babylon came in remembrance before God, to give unto her the cup of the wine of the fierceness of his wrath.

[51] Revelation 18:18-19 And cried when they saw the smoke of her burning, saying, What city is like unto this great city! 19 And they cast dust on their heads, and cried, weeping and wailing, saying, Alas, alas, that great city, wherein were made rich all that had ships in the sea by reason of her costliness! for in one hour is she made desolate.

[52] Revelation 16:20-21 And every island fled away, and the mountains were not found. 21 And there fell upon men a great hail out of heaven, every stone about the weight of a talent: and men blasphemed God because of the plague of the hail; for the plague thereof was exceeding great.

Most people think they make it to heaven by being a good person, and they miss out on God's way to heaven. God sets the rules so we should listen to what God says.

Download this short book. By the time you're finished reading, you'll know whether or not you're going to heaven.